Miriam was more than perplexed.  She was filled with awe and wonder and holy fear.  Who was she that she should be given the incredible favor to be visited by a brilliant messenger

and hear not only that the promises of the Most High were about to be fulfilled, but that she, a humble righteous one would actually get to participate!

She could share some of what she knew, but most had to be held closely to the vest and wait on the Lord to unfold in His time.  What wonder and excitement she must have felt.  Then, to gather with Elizabeth who had another piece of the puzzle, another part of the whole, and compare notes?  It brought a flood of tears of joy!!  Not only was she not crazy and not alone, but the sudden revelation that the Father was working in multiple ways, through multiple people and yet keeping hidden, for a time the plan that was being manifest.

What must that heady cocktail of emotion, Divine Presence and deep conviction have felt like?  How joyous to share with a few who knew and understood?  How challenging to stand, even move forward, in the face of the myriad doubters and question filled observers?

I woke this morning pondering Ezra, Nehemiah, Miriam (Mary), Joseph, Elizabeth, Moses and many others who ‘happened’ to live at a critical juncture in prophecy and were gifted not only with the eyes to see, but the opportunity to participate! Each had a journey that required faith and walking forward as the father led while being amazed that many around them could not yet see the events unfolding around them.  The glory, the wonder, the joy, the patience!  In each case, 99.99% of the Israelite people around each of these examples had no knowledge and may even have been oblivious even to the existence of the prophecies top be fulfilled, never mind that they were unfolding!

Frankly, I do not know with certainty the times we live in, but in a very small way I feel like I can relate to these patriarchs of old who saw and experienced fulfillment before it was apparent to the world.  Since before the First B’ney Yosef Congress some 17 months ago, I have been privileged to observe the Hand of Hashem as step by careful step He is opening vistas the prophets longed to see realized.  And, lately, the pace has quickened!

Visible to the world are the gathering storms of evil.  Obvious to many are the mounting sins and injustices of those who have worldly thrones.  Yet, quietly, parallel and at similar pace, our Father is working out His plan with a far smaller band of faithful.  Like Gideon, only on a grand cosmic scale, He is surrounding the enemy quietly and preparing the ‘big reveal.’

If I, by His grace, have been allowed to see a small part in recent months, how much more has He kept hidden from me, but shown to others in this dramatic redemption that is being played out?  The promises are so grand, so glorious, so gargantuan that only He can work out all of the details, yet He uses His people to be the hands and feet that get to bring the geulah (redemption) about.

Every fiber of my being declares that we are in the door, 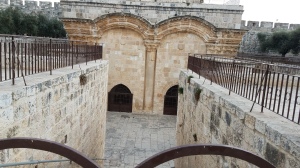 standing on the threshold of this awakening and unfolding of the Majestic.  As a warrior, I feel my senses heightened, my focus snapping from one point to another as I watch and wait.  As one who believes and sees with the eyes of faith, I feel calm and energized, knowing that the King is in control and directing every detail.

There are others, you for example, who are seeing, getting these little glimpses, obeying the directions of the King to make straight His path and prepare this highway in the wilderness.  We must be faithful.

2 thoughts on “Behold! Geulah draws nigh!”