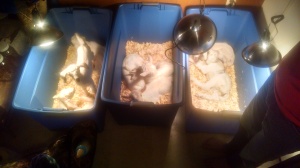 School was out today, so we planned ahead to get some work done on the homestead/farm.  We planned to reinsulate the overhead of the new house as parts had little to no insulation, and other parts had settled significantly from when it was blown in years ago.  But, the job that I thought would take three or four hours became an all day affair!

We had five pregnant mamma goats this time last week.  Unfortunately, on Sunday we lost a momma and three babies due to toxemia, but the rest of the week has been one delivery after another.  Today was the culmination with kidding season ending with a bang!

Midday, we had to stop insulating because one of our girls was in labor with some difficulties.  Turned out the first was a little girl coming breach.  In five years this was our first breach delivery.  It was an interesting adventure.  The next two babies came without much event, though we felt like we had won the lottery!  In the 10 sets of triplets we’ve had, this is the first time that we had three girls in a kidding!!

After Malkey delivered and things settled down, we went back to insulating in a mad scramble to finish before sundown and the beginning of Shabbat.

After we had all showered and were getting ready for dinner, Gunnar heard a soft moan from the barn and decided to go check on our last pregnant momma.  Before he had gotten into the barn good, we heard him holler into the monitor, ‘Get down here.  We have babies coming.’

Everyone dropped everything and we grabbed supplies and jetted back to the barn.  Sure enough, the first baby’s head was out, but no hooves!  Complication!  The doeling was alert and bleating, but because of the way goat’s legs fold (forward, not back), she was in a tough spot. I would need to go in around her and get her shoulders through the canal and pull legs out before she could be delivered!  We prayed and I got to work…  It went easier than I thought.

Honey gave us two more girls and a boy bringing this week’s and this season’s final total to 7 little does and 4 bucklings.  That puts 20 goats on the property, 16 of them milkers!

How blessed we are.

All 11 kids are inside right now being bottle fed.  Most will move to the barn on Sunday.  Right now I feel like we are running a daycare/nursery!  There’s always one hollering for food or needing his/her butt wiped.  So fun!

Maybe I can get a video up in a couple days…

2 thoughts on “Banner day at the Rambos!! Just Kidding!”