Yesterday I was privileged to lead a Shavuot celebration/feast/gathering for a couple fellowships at Lake Greenwood, SC. What a wonderful day of worship, sharing, meeting new brothers and sisters, and eating. 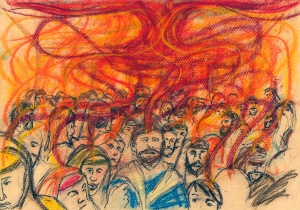 As I prepared a short message for our service, I really felt our Father leading me to consider ‘evangelism’ and ‘the nations.’  While Shavuot celebrations typically center around the giving of the Torah and/or the receiving, in greater measure, of the Spirit, the root that both events point to is evangelism!  Interestingly, others had this same point of focus this year!

The stage is set in Acts 1,

1 The first account I [a]composed, Theophilus, about all that Jesus began to do and teach, 2 until the day when He was taken up to heaven, after He had [b]by the Holy Spirit given orders to the apostles whom He had chosen. 3 To [c]these He also presented Himself alive after His suffering, by many convincing proofs, appearing to them over a period of forty days and speaking of the things concerning the kingdom of God. 4 [d]Gathering them together, He commanded them not to leave Jerusalem, but to wait for [e]what the Father had promised

, “Which,” He said, “you heard of from Me; 5 for John baptized with water, but you will be baptized [f]with the Holy Spirit [g]not many days from now.”

6 So when they had come together, they were asking Him, saying, “Lord, is it at this time You are restoring the kingdom Israel?” 7 He said to them, “It is not for you to know times or epochs which the Father has fixed by His own authority; 8 but you will receive power when the Holy Spirit has come upon you; and you shall be My witnesses both in Jerusalem, and in all Judea and Samaria, and even to the remotest part of the earth.”

First, notice that Yeshua does NOT rebuke their question about ‘restoring Kingdom Israel.   Rather, He simply says, ‘It is not for you to know the times, but go be a witness…’  We have discussed this passage before.  The point is that ‘restoring Kingdom Israel’ is still front and center and Yeshua’s focus is telling them to stay until they receive power, then be witnesses, or ‘evangelize,’ the four corners of the earth beginning in Jerusalem!

Interestingly, and not unexpectedly, they received this power or gift of the Spirit in the Temple on Shavuot.

Shavuot has traditionally been the date believed by the Rabbis to be the giving of the Torah on Mt. Sinai.  And, why not.  The time frame fits after the crossing of the Red Sea and our Father has a history of using His dates/set apart times for His particular purposes.  Further, Rabbinic teaching states that the torah was given in the 70 languages of the nations.  And, yet further, Scripture tells us a mixed multitude stood at the base of Mt. Sinai.

The point is, the Torah, in a supreme act of evangelism, was given to the nations.  Israel, and more specifically, Judah are the ones entrusted with the oracles of God, but it was for the purpose of being a light to the nations.

Fast forward to Acts 2 and the Shavuot immediately after Yeshua ascended and we see a mirror image concerning the giving of the Spirit.

2 When the day of Pentecost [a]had come, they were all together in one place. 2 And suddenly there came from heaven a noise like a violent rushing wind, and it filled the whole house where they were sitting. 3 And there appeared to them tongues as of fire [b]distributing themselves, and [c]they [d]rested on each one of them. 4 And they were all filled with the Holy Spirit and began to speak with other [e]tongues, as the Spirit was giving them [f]utterance.

5 Now there were Jews living in Jerusalem, devout men from every nation under heaven. 6 And when this sound occurred, the crowd came together, and were bewildered because each one of them was hearing them speak in his own [g]language. 7 They were amazed and astonished, saying, “[h]Why, are not all these who are speaking Galileans? 8 And how is it that we each hear them in our own [i]language [j]to which we were born? 9 Parthians and Medes and Elamites, and residents of Mesopotamia, Judea and Cappadocia, Pontus and [k]Asia, 10 Phrygia and Pamphylia, Egypt and the districts of Libya around Cyrene, and [l]visitors from Rome, both Jews and [m]proselytes, 11 Cretans and Arabs—we hear them in our own tongues speaking of the mighty deeds of God.”

Here, the message of the Messiah, is going forth to the nations in all languages – Jew and proselyte!!  Later, the door would be opened even wider to non-Jew through Peter’s vision and Paul’s ministry.  All taught grafting into Israel through the rich root of Messiah, and the keeping of His commandments, the Torah.

The central focus or theme of both the giving of the Torah at Sinai and the recieveing of the Spirit at Shavuot/Pentecost is evangelism.  It is the spreading of the message of inclusion through the blood of Messiah and the walking out of Yahweh’s standards/instructions/Torah.

For us, today, this is a message reminding us that there is still work too be done.  The Jews need to see Yeshua and Christians need to understand the standards/Torah.  The Apostles had and taught both!!  If we walk as Yeshua, then we will teach/disciple for both (Rev. 12:17; 14:12)!  He said,

“Go therefore into all nations making disciples and baptising them in the name of the Father and the Son and the Holy Spirit, teaching them to observe all that I commanded you; and lo, I am with you always, even to the end of the age.”

One thought on “Shavuot/Pentecost and evangelism”

For KING and Kingdom… T-Shirt!

The Church Lied to Me!!