Paul never converted to anything.

Christian mythos teaches that Saul, a rabbi, converted to Christianity.  In fact, that is utter fallacy to support false doctrine/theology.

Here is what my New American Standard Bible says,

The Conversion of Saul 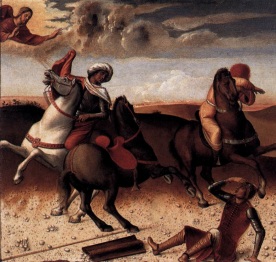 disciples of the Lord, went to the high priest, 2 and asked for letters from him to the synagogues at Damascus, so that if he found any belonging to the Way, both men and women, he might bring them bound to Jerusalem. 3 As he was traveling, it happened that he was approaching Damascus, and suddenly a light from heaven flashed around him;… ”

First, that big ‘The Conversion of Saul,’ is inserted by the editors.  It is not inspired Scripture, and the only thing it does is set the reader up with a FALSE premise!

Read the rest of the chapter and you will see that Saul had an amazing encounter with the risen Messiah.  You will see he begins to preach Messiah, but he was not, nor did he ever ‘convert’ to some other religion!

“Brethren, I am a Pharisee, a son of Pharisees; I am on trial for the hope and resurrection of the dead!”

Some time after both of those quotes he says,

“But this I admit to you, that according to the Way which they call a sect I do serve [a]the God of our fathers, believing everything that is in accordance with the Law and that is written in the Prophets;…”

There are more supporting quotes and statements throughout the Apostolic writings, but why is this important?

This is important because it affects every aspect of our understanding of Paul’s writings.

Most all theology in the last 1700 years is predicated on the false idea that Saul/Paul rejected the Torah and started a new religion.

The Torah says that anyone, even if a prophet with signs and wonders, who teaches any doctrine that leads people away from the commandments of God is to be put to death.

“I have committed no offense either against the Law of the Jews or against the temple or against Caesar…..If, then, I am a wrongdoer and have committed anything worthy of death, I do not refuse to die; but if none of those things is true of which these men accuse me, no one can hand me over to them. I appeal to Caesar.”

and he also says,

“Brethren, though I had done nothing against our people or the customs of our [b]fathers, yet I was delivered as a prisoner from Jerusalem into the hands of the Romans. 18 And when they had examined me, they were willing to release me because there was no ground [c]for putting me to death.

It is a simple and concise case…

There are only two possible conclusions:

1.  Either, Paul indeed was converted to some new Torah-less religion and then to save his skin, he was willing to lie multiple times in a court of law as well as to any who would listen…  making him no Apostle at all!

or. 2.  Paul never ‘converted’ to anything, but kept Torah and preached the fulfillment of the Jewish hope for the coming of the Holy One of Israel!  And, he was willing to suffer and die to get the message to the nations that they could ‘come home’ and be grafted into Israel!!

Take off the man-made doctrinal filters and read the whole Word.

The Paul who allegedly ‘did away with the Law, wrote,

31 Do we then nullify the law through faith? Absolutely not! Instead we uphold the law.

No, Saul/Paul never converted to anything.  He was a Torah-keeping Jew who preached the Gospel of the Kingdom as we can now be grafted into Israel!!

Here are some additional ‘Paul’ pages to consider:

30 thoughts on “The Apostle Paul was NOT a Christian!”

If man : woman as Messiah : Assembly, then…