Many, many Christian television, YouTube channels and radio stations are breathlessly try to outdo each other in trumpeting the rapture implications of the ‘Great Sign’ we are about to see in the heavens.  I, too, have written about the Revelation 12:1-2 sign that will happen this weekend, though I clearly stated that it would not be what the masses want it to be.

Literally, a hundred or more prophesies demand that kol (all) Israel, i.e., both houses, be regathered to the Land.  There is some debate as to the time of this gathering relative to the coming of the Messiah, but certainly, there is no ‘catching away’ to some ethereal nether-region of saints.  That is good Christian fiction.

Anyone who wants to understand Yeshua’s words in Matthew 24:31 concerning the signs in the heavens and the angels sent to gather the elect MUST recognize that Yeshua cites Deuteronomy 30:4 with the direct reference (see the Hebrew) when he says, “…from one end of the sky to the other…”  The conditions for this gathering have not been met, yet!

YES!  The heavens are filled with signs, but the gathering will not happen until those who belong to the God of Abraham, Isaac and Jacob recognize their rebellion against His Torah, the path/way of righteousness, perfectly exampled in Yeshua.  (If it was good enough for Yeshua and the Apostles, then 1800 years of lawless Christian dogma ought not sway us from the way of the King!)  But, maybe the signs are there to wake us up to the fullness of time!

As I have previously stated, I believe that this sign portents a HUGE, even MONUMENTAL, shift in the relationship between the House of Judah and the House of Israel.  Most do not have the eyes to see it… yet, but it will become evident in the very near future.  Just as the sign at the coming of the Messiah in 2 BCE was seen by a few shepherds and some sages from the East, but unnoticed for decades by everyone else, this may have an equally missed point until hindsight clarifies the earth shaking awakening that will accelerate in the coming year or two.

To understand what is happening in the world today, study the massive Torah awakening happening throughout Christendom and then read the prophets!!  Prophecy is unfolding before us and it ALL points to the restoration of Israel, the mission of Yeshua.  Acts 1:6-7!!

Last night, as we sat around the Pesach table, we enjoyed a wonderful romp through Scripture.  A small affair, with only three guests besides my family, we embraced the freedom to pursue Scripture and thought trails induced by the haggadah.  Two of the three guests, 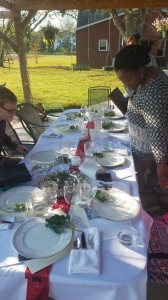 never having participated in a Passover, had insightful questions and opened doors for significant discussion.

As we discussed Scripture and the scattering of the house of Israel, I brought up an interesting connection in Scripture: Both Matthew 24:31 and Deuteronomy 30:4 use the phrase ‘from the ends of the sky’ when speaking of the gathering of Yah’s people.  (I have discussed this connection before and recommend this article as background.)

This morning, I woke thinking about the coming of the Messiah and how to speed it!

Christian and Rabbinic thought differ on whether we can speed or affect prophecy, a point that I made at our table last evening.  We were enjoying a wonderful bottle of Jozef from Har Bracha Winery in Samaria, Israel, my selection for Pesach.  I explained to our guests that the bottle is a fulfillment of prophecy and poignant reminder of the difference in Christian and Judaic perspectives on prophecy.

I have long believed that Scripture does not teach a pre-trib or secret rapture. My full expectation is that like Noah, we will be on the earth for judgment, though Divinely protected as in the Ark. Nowhere, ever, in Scripture do I see an example of God snatching someone out of trouble, rather than displaying His power by preserving IN the judgment. Consider Israel in Goshen while Egypt was being devastated.

End Times Reality Check: A Review of The Rapture Verdict, by Michael Snyder

BFB160418 The Rapture VerdictWhat do Santa Claus, the Easter Bunny, and the pre-Tribulation rapture have in common? There is probably a joke in there somewhere, but the punch line escapes me. The answer, though, is that all of them are part of mainstream Christian practice (at least in the West), but none of them have much basis in Scripture. When held up to the light of Scripture, the Jolly Elf, the Whimsical Rabbit, and the Get-Out-of-Persecution-Free Card actually belong more in the realm of legend, myth, and wishful thinking.

There is no need to explain to Christians that Santa Claus and the Easter Bunny do not exist. Everyone knows that – and it would be better if our children understood it from the start rather than having to face their first crisis of faith when their kindergarten friends expose the truth. What everyone does not know, or does not want to admit, is that the doctrine of Jesus coming back to snatch His people away from the earth before the trials of the Last Days is not consistent with Scripture. The problem up to now is that there has been no comprehensive reference book written to examine this question from a critical point of view….

Many of my longsuffering readers know that I am a bus driver and driver trainer for the local school district.  Previously, I have blogged a few posts related to work and theological lessons from interactions on the job…..  Grouped as ‘Tales from the bus,’ this is another such missive.

Lately, we have been critically short of drivers due to a number of irrelevant factors.  Long story short, several driver’s recent bouts with a stomach bug has left us scrambling each day to get children home.  Routes are being piecemealed between drivers who are willing to pull double duty or drive sections that border their normal routes, then a couple staff members in the office get to pick up the rest.  “Adventure” would be an understatement.

This afternoon I was assigned two short elementary routes that I whipped out before racing to the high school to pick up two routes of high schoolers.  To keep from confusing the elementary students, I used their bus, but placed large prominent numbers on the bus for the two high school routes.  The signs clearly said, ‘1 & 5‘. END_OF_DOCUMENT_TOKEN_TO_BE_REPLACED

The Gospel of the Kingdom is about RESTORATION and a return to EDEN.
Got Torah?

**Updated with links**  Also, some excellent comments below.

A quick post addressing the recent death of PM Ariel Sharon and the prophecies of R. Itzhak Kaduri…    More later.

In the coming days you will hear a great deal about the Kaduri prophecy of the soon return of Messiah after the passing of Ariel Sharon.  END_OF_DOCUMENT_TOKEN_TO_BE_REPLACED

A couple of days ago, I was delivering some metalwork to a customer in the upstate of South Carolina.  While in the area, I called a good friend and brother, Jeff, to see if we could meet-up for lunch.  What a blessed time of fellowship, open Bibles in the restaurant and animated discussion of the Word!

During our conversation he began talking about the difference in building with bricks and stones as an illustration in the context of Exodus 20:24-25.  Let’s read,

24 You shall make an altar of earth for Me, and you shall sacrifice on it your burnt offerings and your peace offerings, your sheep and your oxen; in every place where I cause My name to be remembered, I will come to you and bless you. 25 If you make an altar of stone for Me, you shall not build it of cut stones, for if you wield your tool on it, you will profane it.

I could immediately identify with his illustration as I had written a related article almost a year ago.  His angle was slightly different, but the points are inextricably connected. END_OF_DOCUMENT_TOKEN_TO_BE_REPLACED

Have we misunderstood Ruth?