It is the time of year that we return to the beginning!!  The Torah cycle is renewed this coming Shabbat and I was asked if the Barking Fox, Al McCarn, had published his annual reading plan that includes the Torah Portions along with an ordered reading of the rest of Scripture.  And, YES!  Yes, he has.

Here is a link to his article for the plan and here is the download link for the plan so you can keep a copy in your Bible and follow along.

There is an important conversation taking place that you may want to watch.  Please do not ‘pile-on,’ however this is a good opportunity to read and understand some of the fundamentals in one of many ongoing conversations with brother Judah.

Following begins a good article by friend and brother, Al McCarn.  He and I have been having a very special bridge building experience as we have gotten to know and build friendship with a Jewish brother.  I count it a rare privilege to be involved in a friendship strong enough to begin exploring and discussing differences rather than simply sticking with points of commonality.  As we have discussed, mutual respect and genuine desire to understand the other without expecting them to change to our way of thinking has led to real openness and trust where in we don’t do much tap dancing or hiding in the shadows.  Very refreshing.

I can’t wait to sit down face to face with this Jewish brother and get to know him and his family better.  Baruch Hashem!!

An Explanation to a Jewish Brother 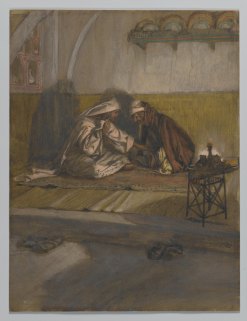 In Interview between Jesus and Nicodemus, James Tissot depicts one Jew’s honest attempt to understand Yeshua of Nazareth and his followers. Although Nicodemus eventually became one of those followers, the world has overlooked one very important point:  neither he nor Yeshua ever ceased being Jewish.

In recent days my friend Pete Rambo and I have enjoyed a lively email exchange with a Jewish brother.  By this time we have identified many of the key differences in our beliefs and the ways we perceive the world.  I think it is safe to say we are confident enough in our relationship that we can ask some pointed questions without fear of alienating one another.  The good thing is that we are all curious about what we believe, and we genuinely want to know how we each perceive the world.  This has been eye-opening on all sides.  I have learned that some of the things I thought I knew about Jews and Judaism were not quite right, just as our friend has learned that some of the things he thought he knew about Christians and Messianic believers were not quite right.  This is the kind of dialogue that is essential if we are to come to an understanding of one another and begin to cooperate in bringing Messiah and building his kingdom.

What I share here is a response provided to our friend in answer to two questions.  The first concerned our celebration of Passover (Pesach) – as in, why do non-Jews celebrate the Feast, and how do we do it?  The second question involved our description of ourselves as something other than Christian.  In other words, how is it that we believe in Yeshua, or Jesus, as Messiah, but do not consider ourselves Christians (or at least traditional Christians).  In the interest of building mutual understanding, here are my answers to those questions.  Continue reading….

I didn’t write this, but I wish I had….  both Al’s comments and the original blog itself.  Want to hear and understand my heart and what I see in Scripture?  This does a pretty good job encapsulating my thoughts.  Hats off to both Al McCarn for this find and comments as well as to the original author, Virag Gulyas, being willing to radically share her heart and frustration.

“This is a paradigm-shattering concept that Christians and Jews especially need to understand.  The sooner we do, the sooner we arrive at Messiah’s coming in power and great glory to finish this work of redemption and restoration.”

Somewhere in the prophets, just before God talks about the terrible things that happen when Israel is attacked in the Last Days and Messiah comes in the nick of time, there is this promise of restoration:

“I will strengthen the house of Judah, and I will save the house of Joseph, and I will bring them back, because I have had compassion on them; and they will be as though I had not rejected them, for I am the Lord their God and I will answer them.  Ephraim will be like a mighty man, and their heart will be glad as if from wine; indeed, their children will see it and be glad, their heart will rejoice in the Lord.  I will whistle for them to gather them together, for I have redeemed them; and they will be as numerous as they were before.  When I scatter them among the peoples, they will remember Me in far countries…

Continue reading: Will I ever be enough for you, Israel?

I have long believed that Scripture does not teach a pre-trib or secret rapture. My full expectation is that like Noah, we will be on the earth for judgment, though Divinely protected as in the Ark. Nowhere, ever, in Scripture do I see an example of God snatching someone out of trouble, rather than displaying His power by preserving IN the judgment. Consider Israel in Goshen while Egypt was being devastated.

End Times Reality Check: A Review of The Rapture Verdict, by Michael Snyder

BFB160418 The Rapture VerdictWhat do Santa Claus, the Easter Bunny, and the pre-Tribulation rapture have in common? There is probably a joke in there somewhere, but the punch line escapes me. The answer, though, is that all of them are part of mainstream Christian practice (at least in the West), but none of them have much basis in Scripture. When held up to the light of Scripture, the Jolly Elf, the Whimsical Rabbit, and the Get-Out-of-Persecution-Free Card actually belong more in the realm of legend, myth, and wishful thinking.

There is no need to explain to Christians that Santa Claus and the Easter Bunny do not exist. Everyone knows that – and it would be better if our children understood it from the start rather than having to face their first crisis of faith when their kindergarten friends expose the truth. What everyone does not know, or does not want to admit, is that the doctrine of Jesus coming back to snatch His people away from the earth before the trials of the Last Days is not consistent with Scripture. The problem up to now is that there has been no comprehensive reference book written to examine this question from a critical point of view….

Here is a terrific short video to share far and wide!!  If you can’t be there, please help someone from your congregation or fellowship get there!!

Earlier this week I had the pleasure of participating in two radio interviews.  Both podcasts are linked in the below linked article.

More about the Birth of B’ney Yosef North America – http://wp.me/p4cMjG-12Q

I’m humbled to have been asked to be on the radio twice this week, both shows are on Hebrew Nation Radio.

A little while ago we finished a couple hours of recording for the Remnant Road show that will air on Monday, January 25, 2016 at 8 a.m. Pacific (11 a.m. EST).  Host Daniel Holdings interviewed Al McCarn (sometimes host, sometimes guest on the Remnant Road) and me about last week’s B’ney Yosef Plenary Session in Chapel Hill, TN.  Our discussion played off of a number of clips from interviews of committee chairs that were recorded at the Plenary Session.  The recorded interviewees were Tzefanyah Pappas, David Altman and Tommy and Dorothy Wilson.  All told, it was a fun two hour discussion about prophecy, Scripture and the coming together of the dry bones!  Tune in tomorrow to catch the show when it plays, or, as soon as it is put into the archives (maybe a week or two) I will post a link so you can download and listen at your leisure.

Sunday and Monday I was just plain exhausted and it was very hard to think about our National Shabbat gathering, never mind begin to process and share some thoughts…  While I am still recovering (12+ hour work days make restful Shabbats that much more precious), I am beginning to put together some thoughts that may prove valuable.  The following are in no particular order and may be a bit random, but I want to share some lessons, ideas, thanks, etc. 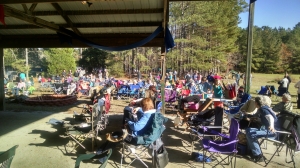 I was overwhelmed by the response and am confident that Abba’s people, and particularly the Messianic community are prepared and yearning for fellowship of the kind we experienced December 5th at the SC National Shabbat.  Clearly, it is more than just me or a few of us who desire to begin building bridges and coming out of our corners to be echad (unified, but not necessarily uniform). As a guesstimate, there were about 225 people there, but most everyone I spoke with knew of others who wanted to attend but for one reason or another were not able.  Essentially, the numbers could have easily been doubled.  What a glorious turnout with all praise and thanks go to our King!

In the weeks leading up to the day, we all prayed a good bit for beautiful weather.  When searching for a host site, Abba led us to Ron Cowart’s campground END_OF_DOCUMENT_TOKEN_TO_BE_REPLACED

Central US and I-35 corridor, this is a message for you:

Here is the information many of you have been waiting to hear:

What:  B’Ney Yosef Region 35 Conference, with emphasis on nation-building, particularly on reconciliation within the entire Body of Messiah

Who:  The invitation extends to everyone in the Body of Messiah who has a love for Israel and desires to see the restoration of the Kingdom of God (Matthew 6:33).  This includes not only Hebrew Roots believers, but also Christian and Messianic Jewish brothers and sisters, primarily from the I-35 Corridor (states of Texas, Oklahoma, Kansas, Missouri, Iowa, and Minnesota).

Capacity:  300 people, including overnight guests and participants for the day only.

Pray for this conference and if you are in this region/corridor, strongly consider attending this very important event.

Who is the ‘Congregation of B’ney Israel?’

Two witnesses pointing to the restoration of the Two Witnesses?

Prophets worth listening to….