‘Ignorance of the law is no excuse’ is a common cliche.

About eight months ago now, we moved to our current 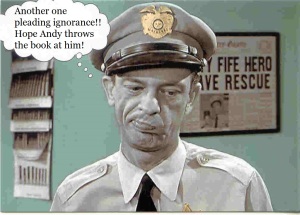 location.  As I drove into a nearby one-light town, I was ‘welcomed’ by one of the friendly uniformed tour guides.  After he asked for my license and registration, he informed me I was doing 55 in a 35!!

I rapidly explained that I was new to the area and had not seen the sign, which he pointed out a couple hundred yards back up the road…  (He was camped out at that little spot, so apparently this had something to do with supporting the local municipality.)  He was gracious enough to give me a warning, but I knew, if that sign said what he said it said (it did, I checked…), then I was absolutely in the wrong.  My ignorance was no excuse.

Did you know that in Torah there is a provision that says, ‘Ignorance of the Law is no excuse?’

“Now if a person sins and does any of the things [a]which the Lord has commanded not to be done, though he was unaware, still he is guilty and shall bear his punishment. 18 He is then to bring to the priest a ram without defect from the flock, according to your valuation, for a guilt offering. So the priest shall make atonement for him concerning his error in which he sinned unintentionally and did not know it, and it will be forgiven him. 19 It is a guilt offering; he was certainly guilty before the Lord.”

There it is.  ‘Ignorance of the Law is no excuse!’

While I certainly think our Father measures the heart and His mercy is more readily extended to genuine ignorance in those who seek with their whole heart, my very real concern is for those who are willfully ignorant after having been pointed in the right direction.  (I addressed this in part the other day when I wrote Grace and Intentional Sin.)

Once we are faced with the possibility that the paradigm we were raised in has some holes in it, instead of defending the paradigm, shouldn’t we be setting aside bias and studying with all diligence in order to overcome our ignorance?

After all, ‘ignorance of the law is no excuse.’  How much more guilt do we carry when we refuse the warnings that the speed limit is not what we thought and we know the Judge is watching?

Here is a series of articles that is a good place to start.

6 thoughts on “Ignorance of the Law is no excuse….”